A Systematic Approach to Capnography Waveforms

Capnography was first proposed for use in the operating room in 1978 and has since become the standard of care for monitoring ventilation.1 Capnography is rapidly growing in use for intubated and non-intubated applications across hospital environments including the ICU, resuscitation, procedural sedation, and postoperative monitoring of patients receiving opioid analgesia. 1,2

When used appropriately, capnography has been cited as meaningful in providing key, often life- sustaining, information in dozens of different clinical applications. These range from common indications such as monitoring for apneas, hypoventilation, hyperventilation, and airway integrity during procedural sedation or in postoperative patients; to monitoring ETT placement, quality of chest compression, and return of spontaneous circulation during resuscitation efforts; to screening for diabetic ketoacidosis, pulmonary embolism, bronchospasm, and even sepsis in the emergency setting.1-4 This value has led to capnography being recommended or required by over 80 clinical societies in over 100 guidelines, standards, and statements in just the past eight years.

Despite the vast number of societal guidelines and clinical articles touting its value, I have met other clinicians who state they do not see much value in capnography. What’s the difference between these two groups? Does it work for some and not for others? Of course not. The difference is in their knowledge and ability to correctly apply and interpret the results in a meaningful manner. With any monitoring parameter, effective application is dependent upon interpreting the parameter values (e.g., etCO2, RR, waveforms, and trends) within the broader context of the patient’s signs, symptoms, and other clinical data available, and then using their using their expertise to assimilate this information to inform best interventions. Capnography waveforms can be insightful for clinical intervention and require a similar systematic approach, much like ECG interpretation.

A systematic approach for capnography waveform analysis is presented in Table 1 (intubated patients) and Table 2 (non-intubated patients) below. Changes in the waveform provide the earliest indication of problems when ventilation starts to change. For example, a patient experiencing an apnea will have a flatline capnography waveform immediately after the apnea, and yet oximetry may not indicate a desaturation for several minutes. Start by looking at the shape of the waveform following the algorithms in the tables. Many clinicians will only look at the etCO2 value itself. In doing so, a clinician would be missing some key information for making clinical interventions. The shape, height, and width of the waveform all provide useful clues as to the quality of ventilation and appropriate interventions.

For example, does it plateau, indicating that you’re getting a true alveolar sample?

When looking at the end-tidal carbon dioxide (etCO2) reading, start by noting the patient’s baseline value, does it fall in the 35-45mmHg normal range? Changes in this reading, with a solid waveform, can indicate changes in ventilation, perfusion, or metabolic status as indicated in the examples seen in the flow chart. Also consider the respiratory rate derived from the etCO2 readings, and changes caused by tachypnea or bradypnea to the end-tidal reading.

Finally, trend graphs can be helpful for looking at changes over time. A good example is a patient with obstructive sleep apnea, where etCO2 values will show repetitive drops and increases subsequent to apneic/hypopneic events. 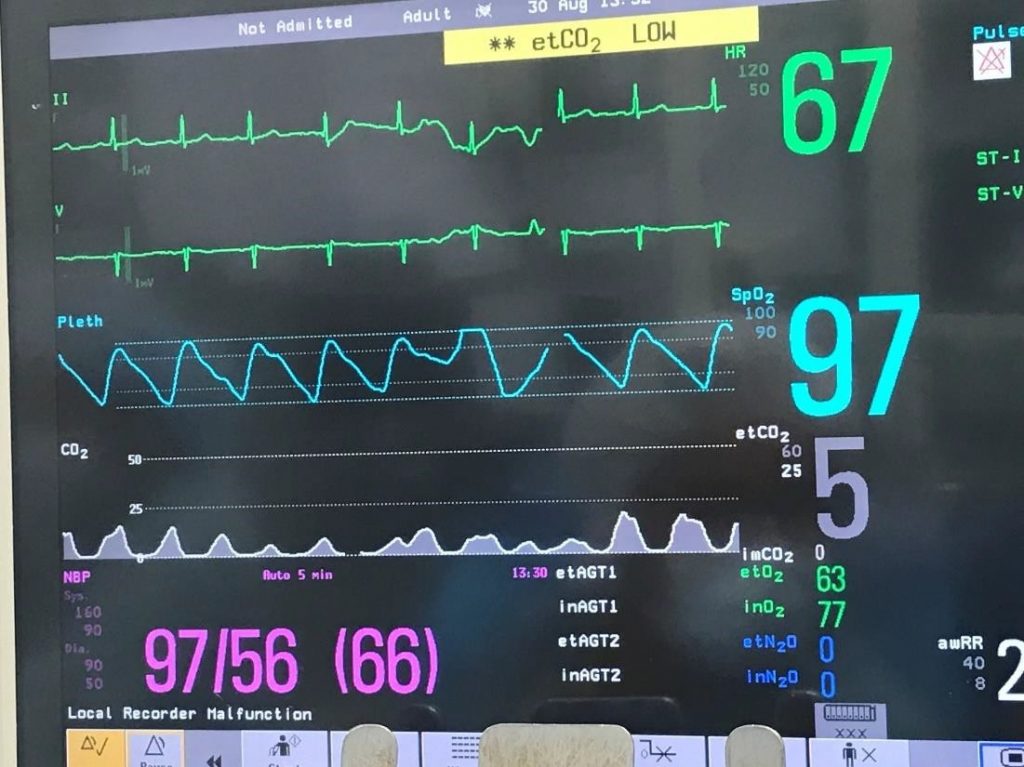 In this example, you will notice the capnograph reading and the etCO2 of five. First, look at the shape of the waveform. It is not square in shape, so the clinician should evaluate equipment and proper placement of the sampling line (e.g, cannula), check the airway for integrity (e.g., reposition and jaw thrust), considering possible airway obstruction or hypopneic breathing (suspect shallow breathing when waveforms are non-plateauing). This patient had received a benzodiazepine and opioid narcotic for procedural sedation and as the patient did not exhibit symptoms of airway obstruction, the patient was encouraged to take deep breaths and sedation medication was reduced which brought the waveform back to a normal appearance and the etCO2 reading back to a normal range. Note that the SpO2 reading is normal (97%) as oxygen desaturations generally lag minutes after the onset of changes to ventilation, especially when supplemental oxygen is in use. Although the alarm is alerting the clinician to the low etCO2, the first intervention is to assess airway and breathing adequacy and intervene appropriately. A number of additional example waveforms can be viewed by downloading this interactive tool.

Capnography and the associated waveforms can provide the clinician with useful information to inform intervention for a variety of clinical scenarios for both intubated and non-intubated patients. Data from the capnograph should always be assessed within the context of the patient’s overall condition including signs, symptoms, vital signs, and other monitoring parameters. A systematic approach to the interpretation of the waveform could lead to earlier intervention with appropriate clinical response and treatment. 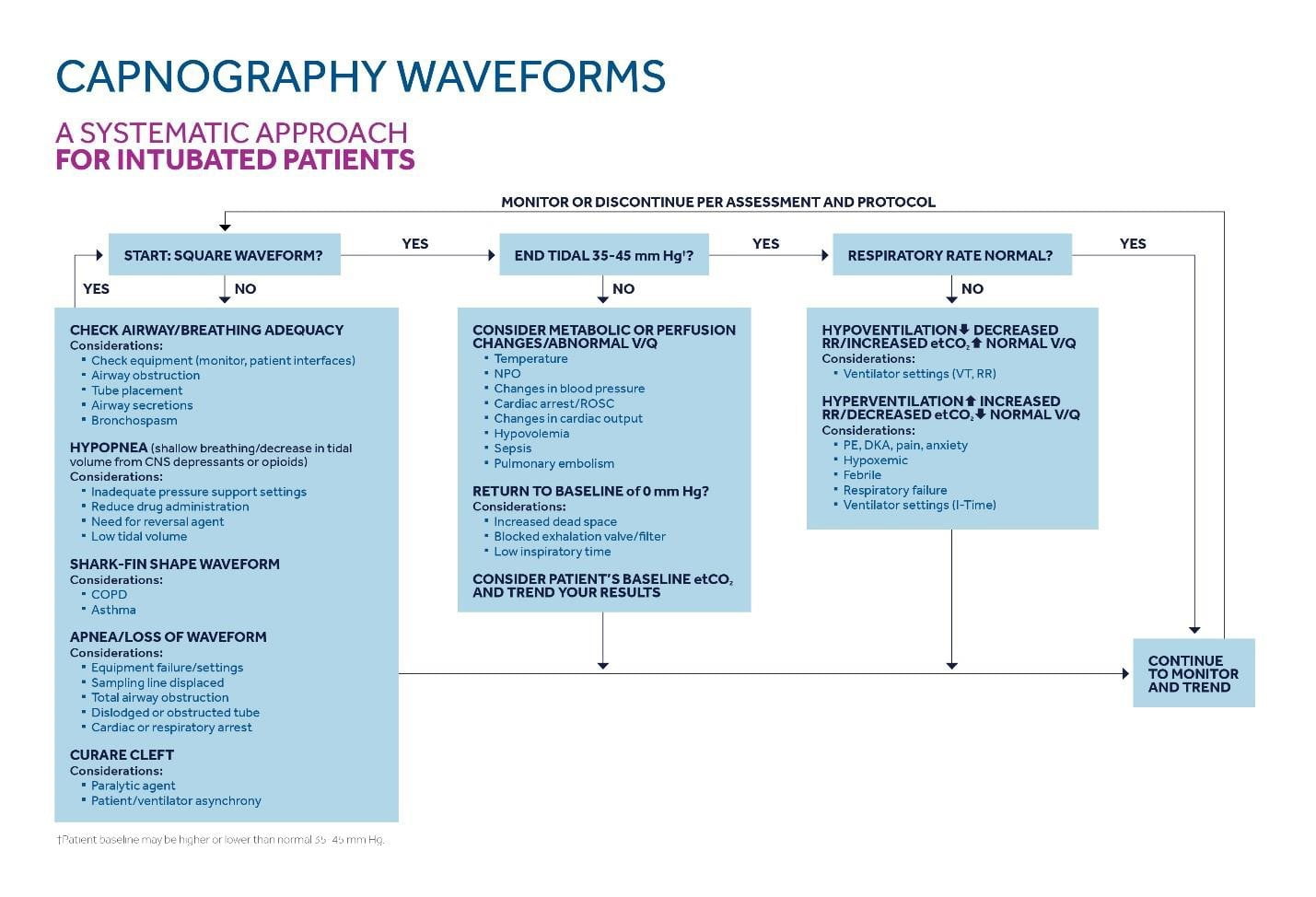 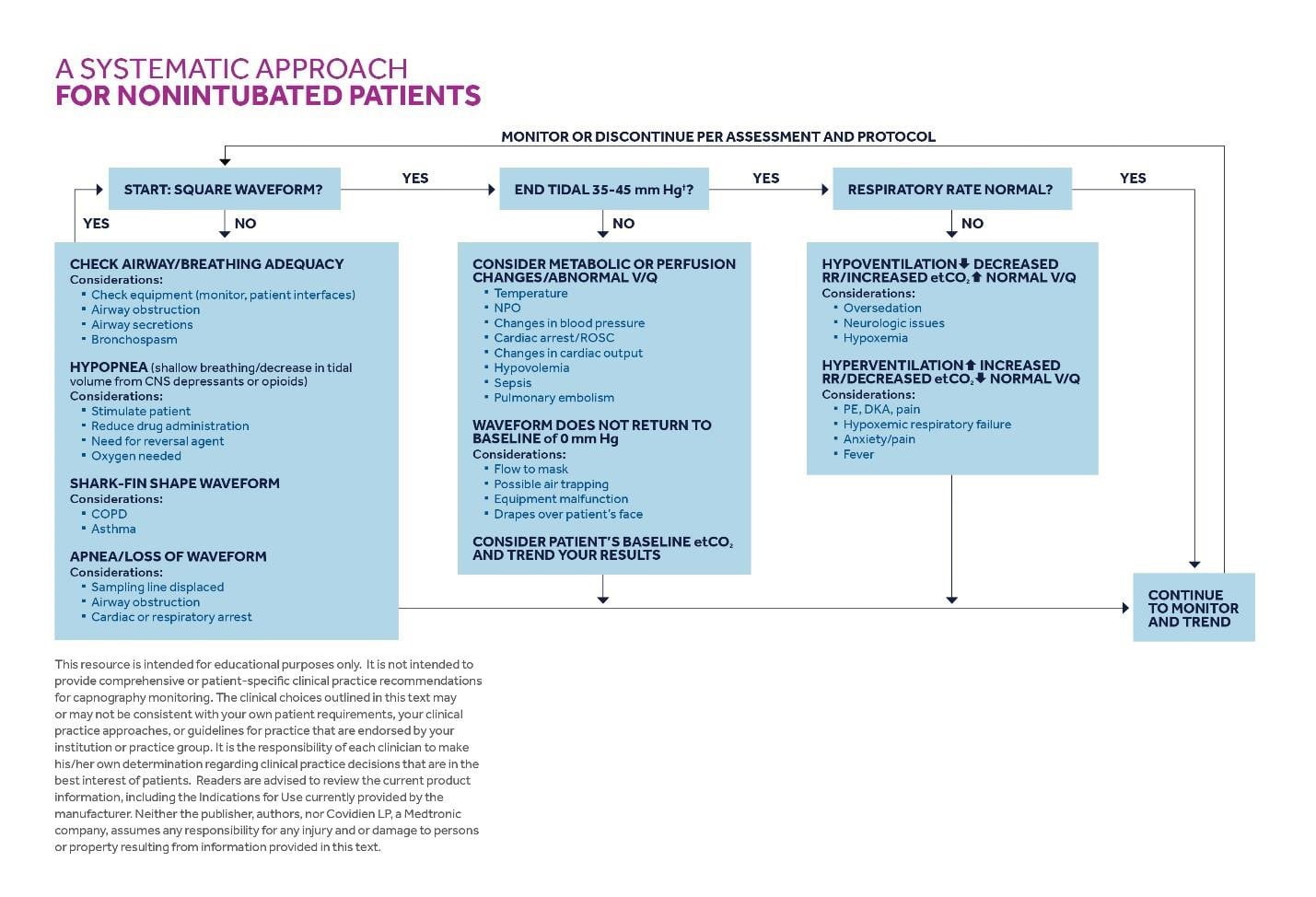 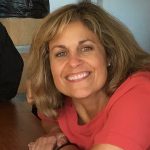 Gina Farquharson, RRT-NPS, MBA, MS, CPPS is a registered respiratory therapist and paramedic instructor in Massachusetts and teaching capnography for almost 20 years.  She is currently a senior consultant for Capnography at Medtronic. 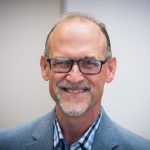